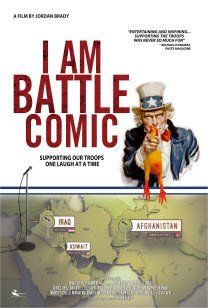 I have to say I was a bit late to the game when I reviewed the documentary I Am Battle Comic by director and comedian Jordan Brady.

The film had already been released for over a year and had accumulated a good measure of critical acclaim from a wide variety of sources by the time I finally checked it out for myself.

For the purposes of transparency I want to point out that I was featured in Jordan’s first documentary of the stand-up comedy trilogy  — I Am Comic.

Subsequently we have stayed in touch over the years, albeit sparingly — it appears that we both seem to be “rolling stones gathering no moss” so to speak and caught up in whatever latest adventure has presented itself in this journey known as life.

To make a long story short, I had contacted Jordan to ask some questions about a possible film project idea that I had when he asked if I had seen I Am Battle Comic. Embarrassingly enough, I had no clue that Jordan had even produced that documentary about comedians entertaining troops in war zones abroad.

Jordan was gracious enough to send me a link to screen the film and I finally did so with my wife one Sunday night and I can say beyond a shadow of a doubt she enjoyed it as much as I did.

As a side note, my wife is also a Jordan Brady fan and keeps up with his latest adventures and musings on Facebook, as opposed to me who tends to use Facebook and other social media as an infrequent and cursory means to let people know that I simply haven’t croaked yet.

Once I had reviewed the film, I immediately contacted Jordan to see if he had any additional information I could use to write an article about this moving and revealing documentary.

I Am Battle Comic is an up-close-and-personal look inside the delivery and execution of live stand-up comedy entertainment for active duty troops at various military installations located in some of the most dangerous areas of the world today.

“Cutting to the chase” as the film cliche goes — I Am Battle Comic resonated deeply with me on two specific levels. The first level was from my own military experience, in particular that of serving in a war zone (Operation Desert Storm) and also as an actively performing professional comedian for a number of years.

Half of my active stand-up career took place while I was on active duty in the Navy after my war zone experience.

While the film is simply outstanding for anyone who would truly enjoy an “inside view” of the conditions, hardships and dangers that our troops endure to protect the freedoms and ideals upon which this country was founded…

This documentary also showcases the effort made and bravery required to provide “comedy relief” to the life and death stress of war zone existence. But I want to take a different approach to this film, the beyond the well deserved, patriotic accolades which is…

I want to use some of the very visible and very tangible aspects demonstrated prominently throughout the film as a means to convey some aspects of career stand-up comedy that I have had significant issues getting across to those who are looking at stand-up comedy as a career.

Specifically, I am speaking about aspects involving the corporate market for stand-up comedians. Now you might have just read that line and immediately thought:

“I don’t what it is that you are smoking Steve, but you better start sharing!” But before you go there, hear me out.

Trying to explain to a comedian, even an experienced comedian  — the aspects of what “a corporate market” is tends to be like trying to explain how quantum physics works. Much of that has nothing to do with how smart someone is — it has to do with their orientation and what they perceive stand-up comedy to be from a strictly comedy club to movie fame-and-fortune perspective.

A Unique But Familiar Performing Environment

The “battle comics” featured in the film (with links to their Facebook pages) are: Jordan Brady, Don Barnhart, Jeff Capri, Slade Ham and Bob Kubota.

Myth: There is a prevalent and pervasive myth in the stand-up comedy community that in order to do “corporate gigs” you to have knowledge about “corporate related” things. This is FALSE. Bands, magicians, jugglers and any other types of entertainers get contracted to entertain in that market, not be knowledgeable about corporate workings and procedures.

A corporate gig from my own extensive experience is any gig that is contracted for a group, organization or entity outside the comedy club arena that demands certain performance rules and guidelines be followed that are not generally required in the “traditional” comedy club environment.

For example, the use of profanity tends to be restricted in “corporate” type performing environments.

So one of the very first obvious things that a comedian should take note of when reviewing the film is that there is a very limited use of profanity. Not only that, you simply will not see some of the more “racy” or “cutting edge” comedy material one might experience in the comedy club arena.

Myth: Many comedians are under the impression that profanity is a must to get laughs as a comedian. These same comedians seem to think that if you are not talking about smelly groin areas, menstrual period sex, consuming a freeze dried turd during beer pong or whatever else currently qualifies as “cutting edge”, original stand-up comedy material — well, you simply aren’t doing stand-up comedy at all.

For folks with those sorts of assumptions,  it is probably best to hold on to that job as an Uber driver so you can at least drive corporate comedians to the good paying gigs they are headed to.

For the record: I have absolutely no aversion to use of profanity at all in a stand-up comedy act by any comedian. I used profanity quite effectively in my own act when I was performing in the comedy club market.

But my material wasn’t based on laughs generated by profanity — I used it more like verbal “hot sauce” that I could add or not add to the routine I chose to serve to the audience — without eliminating the laughter impact for those who can’t (or won’t) tolerate that brand of “hot sauce” depending on the particular performing guidelines for a gig.

Another aspect of the film that stood out to me occurred during the pre-show “meet and greet” functions where Jordan and the other battle comics were meeting the command leaders, administrative staff, etc. upon arrival to the commands.

During these introduction sessions, the battle comics came armed with what are commonly referred to as joke jokes (also known as street jokes — jokes told on the street) that could be used effectively to get off stage laughs.

Myth: Joke jokes (or street jokes) are not acceptable for use in the comedy club environment. For the most part this is true UNLESS a street joke has been carefully edited and/or uniquely adjusted to make it more “original”.

The emphasis in the comedy club market tends to be on originality, for which street jokes simply don’t cut it (they are off the street, open source, non-original and written by somebody else).

But where street jokes come in quite handy for the professional comedian is in interactions with audience members OFF stage no matter what stand-up comedy market or environment a comedian is working in.

This is because they allow a comedian to break the ice, get laughs, and express their sense of humor with a joke vehicle that is by design for use in a one-on one or very small group setting as opposed to stand-up comedy material that is designed specifically for a group dynamic presentation.

What I have just provided you is merely a glimpse of just some the “corporate market” sorts of information, issues and challenges revealed in this film that comedians face should they make the decision to tackle that largely misunderstood market (which is potentially huge and only a relatively tiny number comedians could even begin to successfully navigate through).

And unlike performing in a stateside “corporate” type of gig for a company, civic group or charity organization, as a general rule you don’t have to worry about how to don a flak jacket, get into a biohazard suit or know where the nearest bomb shelter is located.

One of the things I need to make abundantly clear is that “I Am Battle Comic” is so much more than a documentary every new comedian should watch for “training purposes” — it is highly interesting, informative, and entertaining in a way that few documentaries could ever hope to be.

When I contacted Jordan and told him I wanted to do an article about it, he sent me a grip of links to review. Along with those links was this personal message to me:

So humbled and happy you loved the film. It’s the most personal film and experience for me. So much so, that when returned to edit back home, I dedicated the film and any proceeds to charities to help our veterans and the families of active duty. To date, 100% of GROSS PROFITS have gone to charity and this little indie doc has raised over $35K.

For more information about I Am Battle Comic (including a trailer, cast list — including famous comedians who have been “battle comics” — along with multiple resources where you can get your hands on it if you so desire), go to:

I truly hope you check it out. One last thing…

The end of the film was very moving for me — it had been a very long time since I had reflected upon my own military experience of coming home and reuniting with loved ones after months of not really knowing whether I would be coming home alive at all.

Great work Jordan! Certainly worthy of a “Standing O” from me — I appreciate I Am Battle Comic more than I could possibly express.

If you have see this documentary, I would very much appreciate any comments you might have about it below. And if you found this article worthy, I would most appreciate it if you would share it to your social media posse — and THANK YOU in advance for that!

One Reply to “Corporate Comedian Secrets Revealed: I Am Battle Comic By Jordan Brady”