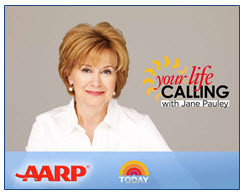 I was contacted yesterday by one of the producers with some information about the segment Killer Stand-up comedian Gid Pool will be featured in on the TODAY Show in May, 2012.

That particular TODAY Show segment is called “Your Life Calling with Jane Pauley” and is produced and sponsored by AARP.

Here is some information about Jane Pauley and the TV series that is featuring comedian Gid Pool:

Jane Pauley is AARP’s contributor to the award-winning “Your Life Calling” series featured monthly on the NBC TODAY Show.

Your Life Calling highlights people age 50+ from across the country who are trying new things – whether it’s starting a different career, learning new skills, changing how they live, or finally pursuing their dreams.

Now in its third season, Your Life Calling has covered a wide range of dynamic reinvention stories:

“I’ve been thinking and talking about ‘reinvention’ for more than 20 years,” said Pauley. “Your Life Calling features people who’ve interpreted reinvention in a wide variety of ways. I hope our stories will inspire everyone to move toward the future with a positive new spirit, focus and energy—with a little help from a powerful team; my new partners AARP and my old friends on the TODAY Show on NBC.”

As one of broadcasting’s most respected journalists, Jane Pauley has been a familiar face on morning, daytime and prime time television for more than 30 years.

She served as the co-host of TODAY from 1976 to 1989, anchored Dateline NBC for more than a decade and in 2004 became the host of her own daytime program, The Jane Pauley Show. That same year, Pauley published her memoir, Skywriting: A Life Out of the Blue, which became a New York Times bestseller.

Pauley is the recipient of numerous Emmy and other awards, including the prestigious Walter Cronkite Award for Excellence in Journalism and the Gracie Allen Award from the Foundation of American Women in Radio & Television.

In her first collaboration with AARP in 2009, Pauley received a second Gracie Award for best national public affairs program with Picking Up the Pieces, a PBS TV special featuring families of soldiers returning from the wars in Iraq and Afghanistan.

In addition, Pauley is a highly regarded advocate for mental health, children’s health and education issues. She and her husband, Doonesbury cartoonist Garry Trudeau, are the parents of three grown children.

Pauley hopes Your Life Calling will assist, inform and inspire the current and coming crop of 50+ Americans: “AARP knows the future is bright for a generation that’s going to remain healthy and vital for 20, 30, 40 more years. AARP has the information and resources people need throughout their process of reinvention. This can be a time of great productivity, meaningful work, pleasure, creativity and innovation.”

For the latest information about the show:

Needless to say, I am very excited for comedian Gid Pool and his opportunity to be featured on such a highly respected, award winning TV show!