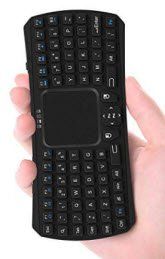 Because we cannot see words and sentences that we say as we speak, nor do we have the ability to structure, edit or otherwise manipulate those sentences in midair as they are spoken…

There will always be an aspect of writing or writing down (the difference is explained here) when it comes to the production of stand-up comedy material.

Well, if you have a smartphone, you only need one small and inexpensive accessory (#ad) to turn your smartphone into a and awesome mini laptop computer. Here’s what I am talking about…

Right now, the smartphone you have is actually a powerful mini touch screen computer tablet with added communication functionality (phone/text).

What makes your smartphone less “writing” friendly (outside the short writing like texts) is that the built-in onscreen keyboard takes up 1/3 to 1/2 of the small screen.

A Bluetooth keyboard will also give you a touch pad (this aspect alone is fantastic), cursor, directional cursor keys (up, down, right, left) and function key access that you don’t have with the built-in onscreen smartphone keyboard.

Important: A word of caution for iPhone users – The link I provided above is for a fully functional Android Bluetooth keyboard. Subsequently you will find that all works EXCEPT the touch pad, even though all other keyboard functionality will.

In other words, if you have an iPhone, you will want to try to find one that has a functional touch pad for that type of phone.

On a personal note: On long trips I still take my laptop. But on short trips (1-3 days), I only take my smartphone, Bluetooth keyboard and the stand because I can do the most important thing I need to do easily on the road which is respond to email inquiries with better and more detailed responses — more than just a line or two which is typical when using only the built-in on screen keyboard.

My smartphone also serves as an effective back-up device that I can use to actually run my online business should my laptop unexpectedly fail. That would be much more challenging if I didn’t have the Bluetooth keyboard accessory (and stand).

The only other optional accessory you might want to consider is a folding smartphone stand (this #ad link is to the one I have and it is $10). Again this is optional but it really comes in handy to put your smartphone in an optional viewing position (horizontally or vertically) when using a Bluetooth keyboard.

As a side note, there is also a free Open Office smartphone app (MS Office clone) that you can get in order to write, edit, restructure and save your comedy material or comedy ideas.

By having keyboard functionality that gives you a full screen view of your smartphone, you can see much more of whatever you are writing instead of just a couple of lines at a time.

And of course there are other writing processes that this could be applied to beyond stand-up comedy material related activities.

A Bluetooth keyboard is an absolute game changer when it comes to developing or producing stand-up comedy material right from your smartphone. This particularly true for those who only have a smartphone and no tablet or laptop to depend on for their comedy writing activities.