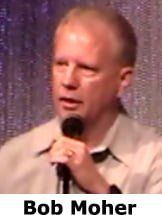 When the opportunity presents itself, I try to interview comedians who are making headway in their stand-up comedy adventures — from different perspectives, different geographical locations, different experience levels, different goals, etc.

Well, I got the chance to interview comedian Bob Moher (based in San Antonio, TX) who is not just one of my students but…

Bob has also managed to turn his comedy talent into a noteworthy income in a very short period of time.

My interview with Bob is provided below and is broken up into 7 brief, but focused YouTube video segments (the total interview was about 25 minutes long).

Even though Bob has only been doing stand-up comedy for a couple of years, he has made some tremendous headway in a very short period of time.

I should also mention that Bob is also a contributor to the Corporate Comedy Secrets Audio Training package provided as a free upgrade to the Killer Stand-up Online Course.

He provided not only a detailed, step-by-step audio interview…

But he also provided a very detailed written outline of how he was able to work with a team of comedians to start generating income quickly as a corporate comedian.

Note: The introduction to the audio training featuring Bob is provided after these interview segments…

Here is the introduction to the audio training he provided for the Corporate Comedy Secrets Audio Training Package:

I want to provide my warmest thanks to comedian Bob Moher for his willingness to help other comedians and share the awesome information and experience he has accumulated in his short stand-up comedy career. 🙂