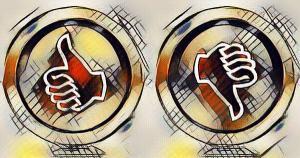 Here’s a great question that comes up from time to time regarding “hit-or-miss” stand-up comedy material when it comes to generating audience laughs:

This seems to happen to me a lot – I will perform a new bit or use a new line in an existing bit and it will work great the first time I do it.

But when I try the material again, it doesn’t get near the laughs or it tanks. Do you know why?

Provided that the audience dynamics are similar each time you performed your comedy material, I can tell you with great certainty EXACTLY why stand-up comedy material works for one performance and not another…

Contrary to popular belief, most of a comedian’s ability to generate audience laughter comes from their delivery — how they say and express their stand-up comedy material, NOT from the literal words and sentences they say as they are written on paper.

The comedian did not deliver their stand-up comedy material in the exact same way they did when they generated the laughs.

As a matter of fact, it only takes subtle changes in energy level, voice tone, a facial expression and/or a hand gesture to make a HUGE difference in the laughter response a comedian can generate with their stand-up comedy material.

But if you unaware of this, you can end up like most comedians — rewriting material until you are blue in the face, looking for the “right” words, when in reality…

Rewriting wasn’t the issue at all.

The problem was in small, yet very important differences in the delivery of the material that is the true cause of the problem.

Another issue that can affect a comedian’s delivery (which will affect laughter response) is that they has lost interest in the comedy material that they are delivering.

The obvious answer would be for the comedian to simply develop new comedy material. The stone cold truth of the matter is that most comedians at virtually every level struggle to develop stand-up comedy that will generate laughter at higher levels.

It should NOT be that way but it is and it is directly related to how a comedian was trained or indoctrinated in the process of developing their comedy material. They certainly didn’t use my system which focuses on talking and structuring talking for the stage as opposed to trying write for a reader using phony “premises” and made up concepts.

So, yes producing high quality stand-up comedy material is a very tough affair for most comedians – so they cling to what works.

But over time it gets stale for the comedian even when it generates the biggest laughs. This leads to a lower quality delivery which leads to lower laughter levels.

Here are three ways to minimize “hit-or-miss” laughs with your stand-up comedy material:

1. Get a video of every performance. This is especially important when you are experimenting with new comedy material.

If you will carefully review your videos, comparing your stand-up comedy material that worked in one show but not in another, you will be able to pinpoint the subtle (or maybe not so subtle) differences in delivery that caused you material to not work or work as well.

Otherwise, you are simply left guessing about what really happened to cause the differences in audience laughter response.

Audio won’t give you all the information that a video will, but you would be able to pinpoint material inconsistencies, missed words or altered punchlines that affected the laughter response in any given performance.

3. Professionally rehearse your stand-up material BEFORE you hit the stage.

Sadly, the only time most comedians “rehearse” their stand-up comedy when they standing before an audience.

By that time, it’s too late. Not to mention the fact that this is one of the reasons it takes most comedians YEARS before they can generate significant laughter with their stand-up comedy material.

It’s also about making sure that you are able to deliver and express your stand-up comedy material in the same effective way, over and over again with consistency and the body language alignment that works best with that material.

One of the reasons the Killer Stand-up Online Course is so effective is because of the emphasis on delivery and professional rehearsal which is overlooked or ignored by most comedians.

So, now you know why stand-up comedy material works well one time and not another, given similar audience dynamics.